Vigorously shake all ingredients, then strain into an ice-filled Collins glass.  Garnish with a lime wedge or peel.

The traditional Tom Collins is a classic drink.  It’s been around for well over 100 years, though its origin is unclear.  What is known for certain is that “The Great Tom Collins Hoax of 1874” swept the nation.  The Hoax centered around a ruse or practical joke that featured one person telling someone else, “Have you seen Tom Collins?  He’s been saying nasty things about you, he’s around the corner, go get him!,” or the like.  The unwitting victim would end up on a wild-goose chase.  Newspapers joined the game, publishing “Tom Collins sightings.”  It became a popular prank, with poor souls going from pub to tavern to saloon, searching in vain for the elusive, non-existent, Tom Collins.  One such story resulted in the victim accidentally shooting himself during the fruitless search.  Sadly, the wound was fatal.

Hemingway being served a drink at the Finca Vigia, Cuba.

What is fairly certain is that the drink first appeared in the 1876 edition of The Bartender’s Guide, by Jerry Thomas.  Though the Tom Collins was originally made with Old Tom Gin (a sweeter style), I suspect Hemingway would have made his with Gordon’s Gin, not to mention no sugar.

Two recipes are noted above, we’ll begin with the traditional Tom Collins, which makes a couple appearances in The Garden of Eden.  This posthumously-published novel features David and Catherine Bourne.  David is a writer, and he and his new bride are on an extended honeymoon, cycling down the southern coast of France.  They come to meet and befriend a beautiful girl named Marita, who becomes a little bit more of a friend to them both, and a love triangle ensues.  David finds himself in love with both girls, but complicating matters is the fact that Catherine is having a bit of a nervous breakdown.  In Chapter XV, Catherine and Marita have gone out for the day while David works on his novel.

The girls were not back yet and he went into the room and took a shower, changed to a fresh shirt and shorts and came out to the bar with its new and handsome mirror.  He called the boy and asked him to bring a lemon, a knife and some ice and showed him how to make a Tom Collins. Then he sat on the bar stool and looked into the mirror as he lifted the tall drink. I do not know if I’d have a drink with you or not if I’d met you four months ago, he thought. The boy brought him the Eclaireur de Nice and he read it while he waited. He had been disappointed not to find the girls returned and he missed them and began to worry.

Cover of Hemingway’s posthumously-published The Garden of Eden (1986)

In Chapter XX, David again spends the morning working, while Catherine and Marita go into Cannes for the day.  David fixes himself a Scotch and Perrier, and has lunch while chatting with the hotelkeeper.  When the girls return,

Catherine came into the room. She had a scarf over her head and sunglasses on and she took them off and kissed David. He held her close and said, “How are you?”

He went out and made a Tom Collins and brought it in to Catherine who had finished a cold shower. She took the tall cold glass and sipped from it and then held it against the smooth dark skin of her belly. She touched the glass to the tips of each of her breasts so they came erect and then took a long sip and held the cold glass against her belly again.

“This is wonderful,” she said.

He kissed her and she said, “Oh, that’s nice. I’d forgotten about that. I don’t see any good reason why I should give that up. Do you?”

“Well, I haven’t,” she said. “I’m not going to turn you over to someone else prematurely. That was a silly idea.”

“Get dressed and come on out,” David said.

“No. I want to have fun with you like in the old days.”

“You know. To make you happy.”

The Tom Collins also makes an appearance in Chapter IV of the Bimini book in Islands in the Stream.  The Bimini portion of the novel centers around the painter Thomas Hudson, his friend Roger Davis, and Hudson’s three sons.  This scene takes place on the evening of the Queen’s Birthday, discussed in the chapter on the Gin and Tonic.

It was dark now and there was a breeze blowing so that there were no mosquitoes nor sand flies and the boats had all come in, hoisting their outriggers as they came up the channel, and now were lying tied up in the slips of the three docks that projected out from the beach into the harbor.  The tide was running out fast and the lights of the boats shone on the water that showed green in the light and moved so fast it sucked at the piling of the docks and swirled at the stern of the big cruiser they were on.  Alongside in the water where the light was reflected off the planking of the cruiser toward the unpainted piling of the dock where old motor car and truck tires were tied as fenders, making dark rings against the darkness under the rock, garfish, attracted by the light, held themselves against the current.  Thin and long, shining as green as the water, only their tails moving, they were not feeding, nor playing; only holding themselves in the fascination of the light.

Johnny Goodner’s cruiser, Narwhal, where they were waiting for Roger Davis, was headed into the ebbing tide and astern of her in the same slip, made fast so that the two cabin cruisers lay stern to stern, was the boat of the party that had been at Bobby’s place all day.  Johnny Goodner sat in a chair in the stern with his feet on another chair and a Tom Collins in his right hand and a long, green Mexican chile pepper in his left.

“It’s wonderful,” he said.  “I bite just a little piece and it sets my mouth on fire and I cool it with this.”

He took the first bite, swallowed, blew out, “thew!” through rolled tongue, and took a long swallow of the tall drink.  . . .

“Listen Tommy.  I have these chiles stuffed with salmon.  Stuffed with bacalao.  Stuffed with Chilean bonito.  Stuffed with Mexican turtledoves’ breasts.  Stuffed with turkey meat and mole.  They’ll stuff them with anything and I buy them.  Makes me feel like a damned potentate.  But all that’s a perversion.  Just this long, drooping, uninspiring, unpromising old chile with the brown chupango sauce is the best.  You bastard,” he blew out through his pursed tongue again, “I got too much of you that time.”

He took a really long pull at the Tom Collins.

“They give me a reason for drinking,” he explained.  “Have to cool my damned mouth.  What are you having?”

Hemingway and son Jack (Bumby) on the stern of another boat, likely Bill Leeds’ Moana, circa 1935.

The Tom Collins makes at least a nominal appearance in a later scene in Islands in the Stream.  In the opening chapter of the Cuba portion of the book, Hudson is at his home in Cuba, and a gale is blowing outside.  He’s alone with his cats, in mourning, and drinking Scotch and soda.  He decides to go into town, specifically to the Floridita.  But before he leaves, he asks his houseboy Mario to make him a Tom Collins.

He rang for Mario

Yes, senor.  He has the car outside.”

“Make me a Tom Collins with coconut water and bitters to take.  Put it in one of the cork holders.”

Thomas Hudson took a sip of the ice-cold drink that tasted of the fresh green lime juice mixed with the tasteless coconut water that was still so much more full-bodied than any charged water, strong with the real Gordon’s gin that made it alive to his tongue and rewarding to swallow, and all of it tautened by the bitters that gave it color.  It tastes as good as a drawing sail feels, he thought.  It is a hell of a good drink.  The cork glass-holder kept the ice from melting and weakening the drink and he held it fondly in his hand and looked at the country as they drove into town. 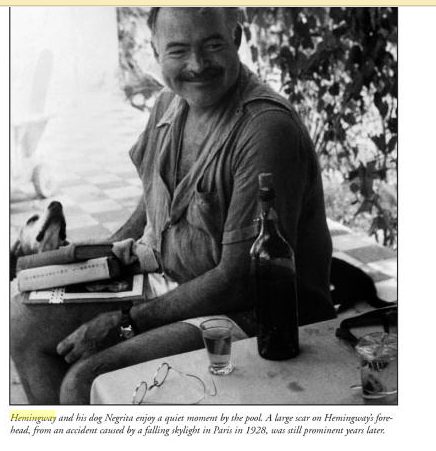 Hemingway relaxing in the shade on a hot summer day in Cuba, circa early 1940s.

Hudson has brought a drink with him on the drive from his home to the Floridita, a drink he claims to need as support for what he is to see along the way:

This was the part he did not like on the road into town.  This was really the part he carried the drink for.  I drink against poverty, dirt, four-hundred-year-old dust, the nose-snot of children, cracked palm fronds, roofs made from hammered tins, the shuffle of untreated syphilis, sewage in the old beds of brooks, lice on the bare necks of infested poultry, scale on the backs of old men’s necks, the smell of old women, and the full-blast radio, he thought.  It is a hell of a thing to do.  I ought to look at it closely and do something about it.  Instead you have your drink the way they carried smelling salts in the old days.  No.  Not quite that, he thought.  Sort of a combination of that and the way they drank in Hogarth’s Gin Lane.  You’re drinking against going in to see the Colonel, too, he thought.  You’re always drinking against something, or for something now, he thought.  The hell you are.  Lots of times you are just drinking.  You are going to do quite a lot of it today.  He took a long sip of the drink and felt it clean and cold and fresh-tasting in his mouth.  This was the worst part of the road…”

Note that the drink Hemingway describes is not a traditional Tom Collins.  Indeed, he’s made a few alterations, substituting lime for lemon, coconut water for sparkling water, and he’s added Angostura bitters.  I’m guessing he left out the sugar, as well, knowing how Hemingway disdained it.  In truth, this latter drink sounds more like the Green Isaac’s Special, the drink Eddy served him on their cruiser while fishing, in the Bimini section of the book (and later called a Tomini).  No matter, they’re both delicious drinks, and I recommend them both highly.  Cheers.

writer
View all posts by philgreene61 →
This entry was posted in Uncategorized. Bookmark the permalink.